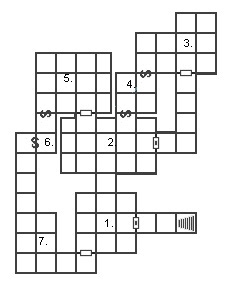 Another day, another adventure, another swarm of orcs breaking off to start a rival tribe. Naskha's swarm, though admittedly small, has found an abandoned dwarven redoubt to hole up in while they prepare to recruit -- and a useful source of slave labour. Now he's been raiding other dungeons and preparing to make inroads against the local thorps ...


1. Entrance Hall: After navigating the brief corridor leading to this room and passing the door (locked with a still-functioning dwarven mechanism), the chamber widens out into a 30'x30' chamber littered with crumbled pillars and loose stone. To the north lies an open archway, and the southwest corner is marked with a door.

In the northern wall lies a secret door, and a bronze-bound door leading to Nashka's own chamber. To the east, a locked door enters into a corridor to the slave chamber; immediately after the bend in the corridor lies a hidden bolt trap (1-8 hp damage) in the eastern wall, triggered by a pressure plate in the floor. If the room's contents are searched a total of 234sp, 62gp, and a cache of six bottles of elven wine (20gp ea.) will be unearthed.


3. Slave Chamber: Six cepes [AC6; HD 1-1; hp 4, 4, 5, 3, 3; Mv 90' (30'); Att 2 claws; Dam 1-3/1-3; Sv F1; Ml 6; XP 5] are found within this dry, brush-filled chamber. They will initially attack to defend themselves -- expecting they have been bartered away -- but may be persuaded otherwise. The western end of the chamber is filled with a brackish pool of some unidentified fluid, viscous and dark, but the southwestern wall may still be seen to bear suspicious scratchings (near the secret door).


4. Binding Chamber: This 20'x20' chamber cannot be accessed until both doors have been triggered; each door will click and shift slightly but will not release until both have been discovered and released.

The floor is almost entirely encircled with an elaborate binding diagram in silvery-white runes. At the centre of the circle is an iron statue; in actuality a khanabit [AC0; HD 5***; hp 37; Mv 120' (40'); Att 2; Dam 1-8/1-8; Sv C6; Ml 12; Specials: binding, fate's terror, black iron pledge; immune to normal weapons; XP 550], the Iron Judge will reanimate as soon as the circle is breached. Chaotic individuals are attacked immediately if possible, those of neutral alignment are pledged, and those of lawful alignment (or neutrals, if they happen to be good bargainers) are offered a pledge of reward if the warding circle is destroyed. Should the circle actually be destroyed, the khanabit draws heavy bangle-like black iron bracers (+1 AC, -1 damage per die of fire damage) out of the sleeves of its robes -- one pair for each party member that agreed to free it -- and then fades from sight.


6. The Mother Growth: Nearly this entire tiny, hidden chamber is taken up with a hollow-riddled, woody mass of overgrowing white-and-rust fungus, still showing signs of chunks broken off when it was squeezed inside and pressed against the eastern wall. This is the mother growth that spawns the orc swarms' cepes slaves -- and within five minutes of discovery by the party, the mother growth disgorges a new cepes ...

The khanabit's treasure seems like a little much for a low level minidungeon. A +1 to AC and I resist 1 to fire... for each and every party member? I would be inclined to give out only 1 set of bracers were I to run this dungeon.

Aside from that it's a good adventure!

Treasure is the most easily-adjustable part of an adventure for me, so I tend to leave it as I prefer it and allow other to tweak to taste.

For me, given that a khanabit may well apply other pledges and I am usually running games with only one or two PCs, the treasure works well. Others are free to make adjustments :3

Looks great! I love the way the circular shape of the place opens things up for some very interesting manuvers. (Of course, I would say that, right? ;p )

What is that? I dunno. Taichara hasn't written it up yet. But it sounds like the name of one of her magical swords to me.

You would, but tis appreciated nonetheless :3

*grinning* It does sound rather like one of Jie Chie's stunts, doesn't it? Shall I give it a bit of pondering? ;3

Why don't we both do it? Set a date, and we'll both post our versions on that day?

What would you like as a date? I think I can tackle anything after tonight/tomorrow-day --

Shall we say Friday?

Friday 11 Sept? Works for me :3 (just confirming the date, my backshifts give me odd sense of 'day'-start sometimes *grins*)

Yep, the 11th. And I think I got Oddysey of "How to Start a Revolution in 21 Days" on board as well. So we could have three versions.

Anyone else out there interested? Feel free to jump on in.

Excellent! The more the merrier X3

I'm interested, but I'm curious where this got started. Where did "wayedge" show up?

David: Wayedge was the Word Verification for my first comment on this post. It struck me as especially appropriate considering the type of stuff Taichara invents.